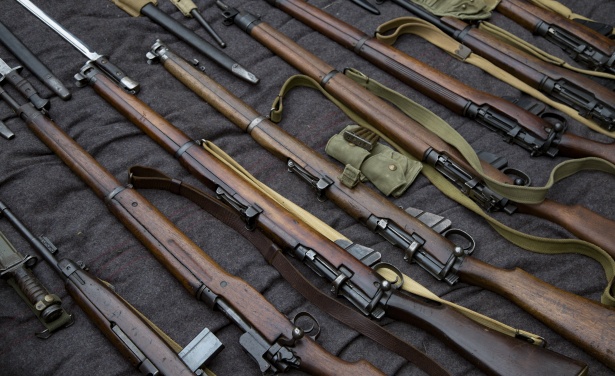 Pistol vs. Rifle vs. Shotgun: Which Should You Choose for Home Defense?

One of the oldest and most passionate debates of the gun community is what to choose for home defense. Should you get a handgun? A rifle? A shotgun?

Every firearm category has its fans with no shortage of arguments about why their favorite weapon is the best. But what works best for one person may not necessarily work well for you.

You’ve probably heard expressions like, “Just get a Glock” or “Just buy a 12 gauge,” sometimes without further explanation. Learn the pros and cons of each type of firearm for home defense and determine which type is the best solution for you.

Handguns of all types are perhaps the most common type of firearm owned by Americans today.

Although revolvers were once the quintessential American handgun until far into the 1980s, the advent of newer, more reliable, high-capacity semi-automatics has resulted in pistols supplanting revolvers as America’s favorite handguns.

The main advantage of handguns compared to rifles and shotguns are their compactness. Handguns are the only category of firearm you can reliably carry concealed. However, this advantage is not relevant for home defense; you don’t need a license to carry in your own home, nor is there a need to conceal your firearm from the public.

So, what advantages do handguns offer for home defense? More than you might think at first glance.

When it comes to home defense rifles, the most common choice for American citizens will be some type of semi-automatic centerfire rifle, such as the AR-15 or the AK-47.

Although many other rifles exist, such as manually operated bolt- or lever-action rifles or rimfire rifles, such as the .22 Long Rifle, they are generally not used for home defense out of practicality concerns.

Most defensive rifles shoot a relatively low-recoiling, easy-to-control intermediate cartridge. Examples include .223 Remington, .300 Blackout, 5.45x39mm, or 7.62x39mm. Some examples may shoot more powerful cartridges, like the .308 Winchester, although these rifles are intended more for hunting than defense.

Shotguns are the classic home defense firearm and for good reason. Virtually all industry experts and firearms specialists agree that in close-quarters, the shotgun is king. Home defense is the most likely type of close-quarters combat situation an average civilian may find themselves in.

Defensive shotguns in the United States are typically pump-action or semi-automatic, although the classic double-barrel still has a presence on the market.

12 gauge is, by far, the most common shotgun cartridge, although 20 gauge has a place for defensive applications as well, particularly for shooters who find 12 gauge recoil too high.

Contrary to popular belief, aiming is not a suggestion with a shotgun. Within typical home defense distances, the pellet spread will not be large enough to account for potential aiming errors.

Outside of the pros and cons of each category, factors such as price, ammo availability, and shooting proficiency play a significant role in your decision. Regardless of your choice, practice with it! A home defense firearm is only as efficient as the person behind the trigger.