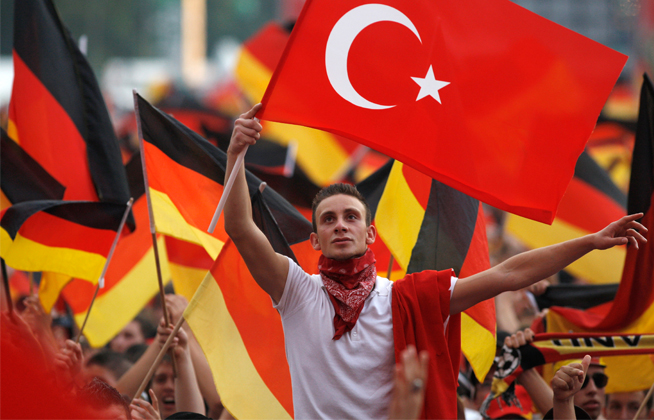 Turks in Germany are a Time Bomb

“The Turks in Germany are a time bomb, at least the majority of them”. This is the statement with which Peter Cohen, an American visiting professor at Munich University, concludes his recent study in Germany.

Three million Turks live already in Germany already, while 2.5 million of them have German nationality, and the majority of them are conservative Muslims.

Are they integrated in the German society? Not really.

The majority of them speak broken German, especially the elderly.

“They don’t want to integrate in the German society,” says Hartmut, who doesn’t want to be identified for fear of reprisals by violent Turks. “They even hate to be called ‘migrants’. They feel very Turkish. They happen to be in Germany as the elderly generation in the 1960s had been recruited to work in the car and coal industries. Now, culturally the majority of Turks, even the young, here in Germany feel very Turkish. ” Adds Hartmut, who is a social scientist at a German university.

Professor Cohen subscribes to what Hartmut says about Turkish migration, “In the USA, for instance, migrants usually integrate in the American society, latest when the second generation is there. My survey indicate that the majority of Turks insist on keeping their Turkish identity and their cultural heritage. They feel at home in the Turkish culture.”

Very few Turks in Germany have a regular job; about 20%. The other 80% live on the so-called Hartz IV (state social benefits). 70% of their children have no GCSE; they left school before they finished their basic education.

“They cannot find a job? That is not true. There are jobs out there. But they prefer to live on state benefits and lead an easy life. Why should they work? Further, the German social benefit system doesn’t encourage them or force them to accept any job.” Says Hartmut.

Hartmut also said, “Some of those who live on state benefits have very often a part-time job of which neither the Job Center nor the Finance Office are aware of.

According to the German state benefit system, every adult citizen who possesses the German nationality, unemployed and cannot find an appropriate job, is entitled to get monthly 482 € ($627). Additionally, parents get for each child under 18 years old, 200 € ($261), plus all their monthly expenditures in terms of rent, heating, power, health insurance, and public transport.

“Amazingly enough some Turks who live on the generous state benefits can afford to buy a house or an apartment and drive luxurious cars like Mercedes or BMW.” Says Klaus, a landlord whose tenants are a case in point.

Kamal (46 years old) and his wife Shadia (42 years old) have ten children under 18 and live on Hartz IV (the German social benefit system). They have a monthly net income of about 3000 €. In addition, all their spending on rent, health care, transport, heating, etc. are paid by the state.

Kamal never worked or had a regular job, never finished school, and never learned a profession. Now he claims that he is “ill.” Klaus, the landlord of Kamal says, “The man is fit.” He even confessed to Klaus that he lies when he says he is ill. “He told me once, ‘Why should I work if I can live well without/'” Klaus quotes Kamal.

Kamal is obliged to regularly report his joblessness to the Federal Employment Office (Bundes Agentur für Arbeit) in his town. He does so when he is invited for a job interview. But he always alleges that he is “sick:” He allegedly has “unbearable pains in his back and joints.” Therefore, he cannot take any job. The only one who knows the truth about Kamal is his landlord Klaus.

Klaus and many other Germans are outraged about Kamal and his like. “It is us, taxpayers who have to finance odd buggers like Kamal. This makes me sick.” Klaus frowns at me.

Besides, for Turks living in Germany, having children is a lucrative business. Some Turks turn to corruption to make this work.

Generally speaking, German citizens can enter Turkey with simply showing their personal identity card. Hence German Turks, particularly women, travel to Turkey and come back with a “leased” baby. They get the baby temporarily from relatives and claim at the German border that it is their baby who was recently born in Turkey.

Khaled, a Turk, told me that you can get “a false birth certificate” in Turkey for $10.

Back in Germany, the “new” baby is registered at the town hall administration, and the “mother of the baby” starts getting 200 € ($261) monthly.

Living on the state benefit system has become a basic part of the culture of the Turkish community in Germany.

Nicole, a German school teacher told me once, when she asks her students what they want to become in the future, the majority of Turkish students say, “Hartz IV Empfänger” (state benefit receiver). When she asked one of her students, “Why is that?” The girl answered, “My parents live on Hartz IV and lead an easy life. They sleep longer in the morning, and always have got enough money.”

In private, German policemen and women complain about the “Germans” of Turkish descent. Helmut in Berlin told me, “Most car accidents are caused by Turks or east Europeans. They are really careless motorists. They do not respect traffic rules.” Then he turned to his colleague and added, “But who dare say that in public?”

Indeed, the German media and politicians always talk about “integration,” but they never point their fingers at the Turkish community and demand abiding by the law like all citizens.

Hartmut asserts that “The German public, are better informed. They know that it is the Turks who do not respect rules, and don’t want to integrate in the German society.”

“I don’t know what kind of experience the others have made, but my experience is very clear. I live in an area where the speed limit is 30 km per hour. But guess who drives fast in this area? It is mostly Turks.” Jürgen said.

His friend Michael added, “But who dare say that? Then you’re accused of being an old Nazi. This is bizarre! The NPD is a Nazi party, but they are not so violent as some Turks are. Some Turks are really violent, in particular those Salafists amongst them. During a demonstration a couple of months back, a Salafist stabbed two policemen with a sharp knife. “

Ulrich, a German citizen, agrees. “I drive almost every day. Who steals your right of way? It’s often Turks. They are usually rude and reckless. My wife works as a teacher at a primary school. She says, most students who disturb classes are usually of Turkish descent, and their parents never attend school parents assemblies.”

To add insult to injury, when Turks are killed or burn to death, they rush to point their fingers at the right-wing party, the NPD and ideologically similar organisations.

A couple of years back, 8 Turks, owners of restaurants, were killed. Promptly and without delivering any evidence, the Turkish community accused the NPD of carrying out these killings. Until now, however, and despite intensive investigation, the police have not been able to establish who killed the 8 Turks. Some even claim that those killings were maybe carried out by the Turkish mafia.

Most recently, a Turkish woman and her seven children died over the night by fire. Again, the Turkish Ambassador to Berlin and the Turkish media accused the NPD of deliberately sparking the fire.

“The German media and German politicians across the board do everything in their power to avoid naming things by their name. They fear that that might create two inconsolable fronts: the German on one hand and the Turkish on the other, taking into account the fact that you have more than three million Turks living in Germany, most of them are Muslims and many of them sympathise with Islamist terrorists.” Cohen says.

Two weeks ago a Salafist cell was discovered. These Muslim extremists were planning to kill the head of Pro NRW (a right-wing organisation). Four men were arrested. As their apartments were searched, arms and grenades were discovered.

The media reported, “Four men were arrested, one of them is Albanian and the other three are German!”

The three men, the media referred to, were Turks. But the media and politicians avoided saying that.

Almost every day the German media quote German politicians who demand banning the NPD. The have drafted a petition that will be submitted to the Federal Constitutional Court (FCC). In the petition they appeal to the FCC to ban the NPD. Some politicians and legal experts, however, believe that  the FCC won’t approve the ban. They argue, it’s unconstitutional.

“All this,” Hartmut believes “is intended to distract from the real enemy of the German society, namely the Turks and not the NPD. It’s Turks who are increasingly disrupting peace in this country, not the NPD.”

Turkish ghettoes are building every where in Germany. The majority of Turks cluster in certain neighbourhoods. No Germans live there or dare to live there.

“Disintegration is the right word which applies to Turks in Germany and not ‘integration,'” believes Hartmut.

“The dream of having an Ottoman Empire is not dead among the Turks.” Says Jalal, a Kurdish freelance journalist living in Germany. He added, “The Turkish establishment believes that the Turks in Germany constitute a valuable spearhead for the resurrection of the Ottoman Empire. What could not be accomplished by force in the 15th century might, many Turks believe, become a reality in the 21st century in Germany, the heart of Europe. Besides, don’t forget that demographically, while the German population growth is almost null, it is even contracting, the Turks in Germany have an annual birth rate of more than 5%. Therefore, demographers assume that by 2050 the majority of people living in Germany will be of Turkish descent.”

I said, “This might be regarded rubbish by German politicians and the German media.” Jalal responded, “That might now be rubbish, but not in 50 years. Besides, the Turks want to get rid of two nightmares: delivering independence to the Kurds and acknowledging their massacre they inflicted on the Armenians.”

On every visit to Germany by the Turkish Prime Minister, Recep Tayyip Erdoğan, the man urges his country men and women to stick to their Turkish identity in all respects, in terms of language and culture. Many people in Germany, according to Cohen’s recent study, believe that that is a stern call on Turks in Germany not to integrate in the German society.

The Turkish community in Germany responds positively to this appeal. “De facto, the Turks in Germany, live geographically in Germany, but culturally they are living in Turkey. Some Turks are even convinced that their culture is superior compared to the German.” Cohen comments.

Dr. Sami Alrabaa, an ex-Muslim, is a professor of Sociology and an Arab-Muslim culture specialist. He has taught at Kuwait University, King Saud University, and Michigan State University. He also writes for the Jerusalem Post and is the author of the book: “Veiled Atrocities”, published by Prometheus, New York 2010 . 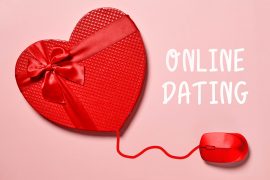 7 Golden Rules of Online Dating to Keep You Safe 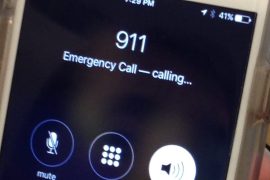 Non-Emergency vs. 911: Which One Should Be Calling? 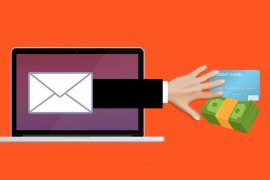 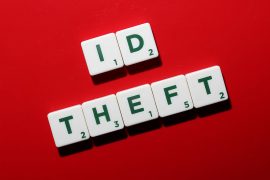 7 Most Common Identity Theft Fraud You Should Know By Now